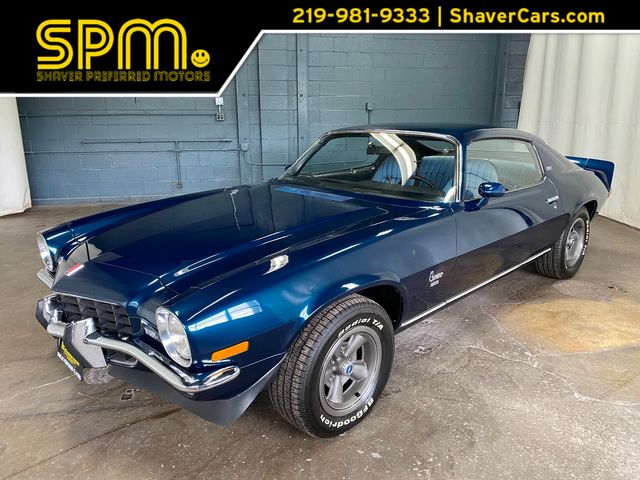 *This calculator is for informational use only and is based on the information you provide. Actual loan amounts and payments will vary based on additional items such as taxes and fees as well as the actual interest rate available to you from a financial institution.

1973 Camaro LT Type – This is a one owner, original paint, 26K original miles car.  The car was ordered new from Keystone Chevrolet in Chicago on May 24, 1973.  The owner special ordered it as a “date night” weekend cruiser with the “Spcl. Performance pkg”.  The “Spcl. Performance pkg” is the same exact package as the Z28.  After a few years of regular use, the car sat idle but remained in the original owner’s possession and was driven sporadically.  In 2018 the original owner wanted to make the car road worthy, so he commissioned a complete drivetrain restoration with the intent of restoring all of the original engine components including the original smog pump.  There were no engine modifications done at this time as the engine internals were reused to make the engine bay look as it did when he picked it up from the dealership in 1973.  The transmission, rear end, brake system, fuel system, front end components, etc…were also restored at this time so that the car rode like new.

In 1973 the Chevy dropped the SS (SuperSport) model and replaced it with the LT Type trim.

The body and undercarriage of this car are original and unrestored.  There is zero rust/rot in any of the body panels and the car was never in an accident.  The floors, frame rails and trunk are original and rust free.  The paint is the original paint from 1973.  It is very nice for being original but shows its age in some areas.  Because it is a one-owner survivor we did not want to repaint the car.  This car is original down to the glass.

The interior is original, in excellent shape and has not been touched.

This car is a great example of a muscle car time capsule and is ready to be driven anywhere!

The following options can be seen on the original invoice pictures:

Prices are all plus tax, title, license fees and dealer documentation fee of $199.95